Medicaid director of pharmacy awarded the 2017 Spirit of Pharmacy Award 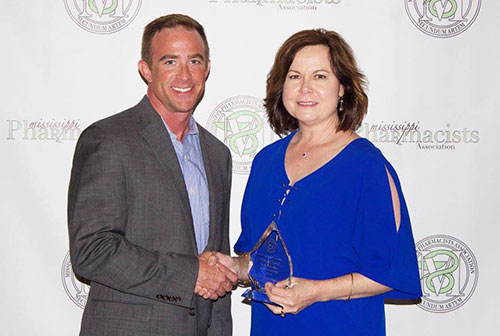 Terri Kirby, director of Pharmacy for the Mississippi Division of Medicaid (DOM), has been awarded the 2017 Spirit of Pharmacy Award from the Mississippi Pharmacists Association for her work, including overseeing the implementation of a new statewide reimbursement methodology as required by the Centers for Medicare and Medicaid Services.

Presented by Executive Director Peter Stokes, the award recognizes the service and hard work of a member who has demonstrated extraordinary commitment to the profession. Kirby has also served as the past secretary of Mississippi’s Prescription Drug Monitoring Program and has been instrumental in a number of policy changes within DOM to address the opioid epidemic. Kirby joined DOM in 2003. As director of Pharmacy for the agency, Kirby oversees the provision of medication to beneficiaries, analyzes drug compliance, and monitors the use and cost of medications.