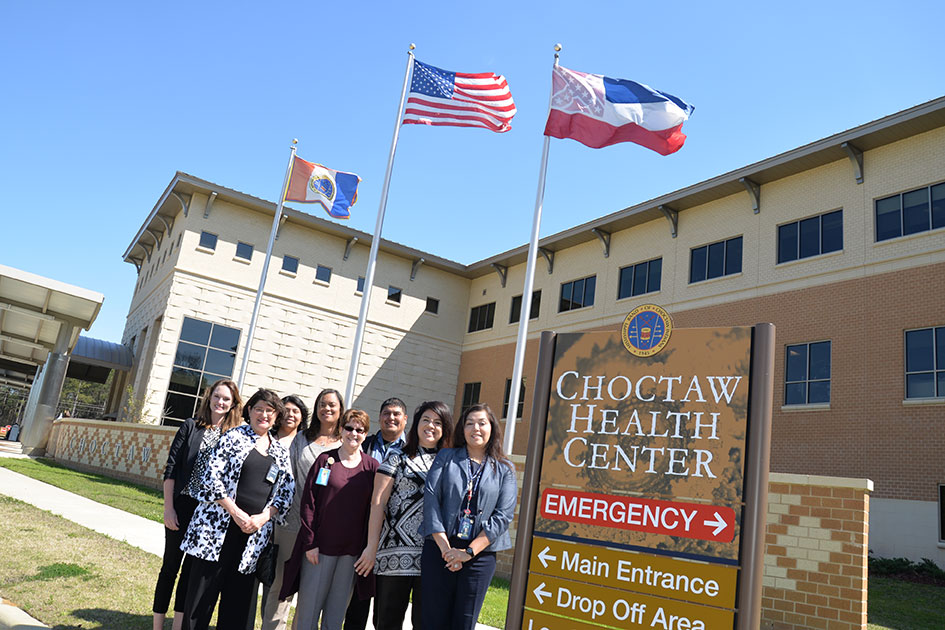 March 8, 2015, was a momentous occasion for the Pearl River Community of the Mississippi Band of Choctaw Indians (MBCI). On an unusually frigid spring day filled with freezing rain, administrators and health-care professionals moved into the community’s brand new, 180,000 square-foot Choctaw Health Center.

Two years later, that health center represents the heart of health care for roughly 5,000 members of the MBCI, as well as those from other tribes, who live in or near the largest of the eight Choctaw communities throughout Mississippi. The health center is the largest facility in a network of clinics that make up the Choctaw Health Department. It offers a “one-stop shop” for health services to any of the approximately 10,000 Choctaws around the state, members of other federally recognized tribes, and non-Indian visitors to the reservation in the case of emergency.

With many Choctaws either enrolled in or eligible for Medicaid, representatives of the health center say the direct line of communication and personal connections they have with the Mississippi Division of Medicaid (DOM) plays a critical role in the health and wellbeing of the community.

“We provide the services for the tribal population, but we also make sure that we have the structure set up to make sure patients we are referring outside of the facility are covered with some type of coverage,” said Tina Scott, acting director of the health center. “That’s where you guys come in to help us.”

The Indian Health Care Improvement Act (IHCIA) amended the Social Security Act in 1976, to permit reimbursement by Medicare and Medicaid for services provided to American Indians and Alaska Natives in Indian Health Services and tribal health care facilities, like the Choctaw Health Center. The IHCIA also gives states a 100 percent Federal Medical Assistance Percentage for Medicaid services provided through these facilities. In 2010, the IHCIA was made permanent by President Obama as part of the Affordable Care Act. The act now has no expiration date.

The health center works with different types of insurance, but Medicaid is an important funding source, Scott said.

“It’s very critical that we continue to assist people who are eligible for Medicaid and those they enroll, and have that resource for them for their individual health and the health of their family.” Scott said. “Other tribes are not as fortunate to have a close relationship with the state Medicaid office.”

Protections for American Indians were augmented even more by Section 5006 of the American Recovery and Reinvestment Act (ARRA) of 2009. It provides certain protections to prevent states from imposing Medicaid premiums or any other Medicaid cost sharing on Indian enrollees. The ARRA also emphasizes the state-tribal relationship by requiring that states consult with the tribal community on Medicaid and Children’s Health Insurance Program (CHIP) policy matters.

DOM and representatives for the Choctaw Health Center communicate on a regular basis about State Plan Amendments and waiver amendments, and meet quarterly in person. These meetings take place either at the central office in Jackson or at the Choctaw Health Center. On one such visit, held at the health center on March 21, 2017, Choctaw officials applauded DOM representatives for providing such a direct stream of communication.

“The main purpose of a visit like today is to make sure everyone is clear on billing changes or plan amendment changes so that the beneficiaries are best served and the providers are best served,” said Mary Harrison, Deputy Health Director of the Choctaw Health Center.

“We have an opportunity to engage and ask questions to see what we can improve on,” Scott said. “The meetings are very coordinated and well organized,” Scott said. She added that the Tribe’s legal counsel in Washington, D.C., has characterized the strong ties between the two organizations as extremely rare compared to most other states in the U.S.

Scott and others at the Choctaw Health Center say that relationship helps with their goal of emphasizing preventive health care in their community by covering a wide range of services.

The Choctaw Health Center offers a wide variety of specialties such as primary care, pharmacy, prenatal care and dentistry, but some of the patients must be referred outside of the Choctaw Health Department. With Medicaid, American Indians who are covered by Medicaid or CHIP are able to receive services outside of the tribal system.

“Our Tribe is very unique and very blessed in that we are able to offer preventive services and take those services to a different level, versus just having the services when you’re in an emergency and being transferred from the emergency room,” Harrison said. “And part of our ability to do that includes sources like Medicaid.”

Margaret Wilson, nurse office director in the Office of Policy, acts as the liaison between DOM and representatives of the Choctaw Health Center. She and her policy team are charged with sending Tribal Notifications for State Plan Amendments, scheduling quarterly meetings, creating an agenda to follow and more. The Tribe’s focus on preventive health resonates with Wilson.

Wilson says she’s impressed by the Choctaw Health Center and the range of preventive services provided at the facility.

“I feel like being able to provide preventive services – like telehealth – all of that is working to help get Mississippi healthier,” she said.

Choctaw Health Center itself services ten counties, Scott said, and the MBCI has a significant youth population, meaning they are able to start promoting health from the start.

From the Office of Communications, Mississippi Division of Medicaid